Marly Cornell was interviewed by master coach and Venerable Women founder, Dawn Morningstar, on her podcast. Dawn interviews spiritual women changemakers and professionals who can help the changemakers bring their gifts of healing, teaching, and guidance into our world.

And learn more about Venerable Women. 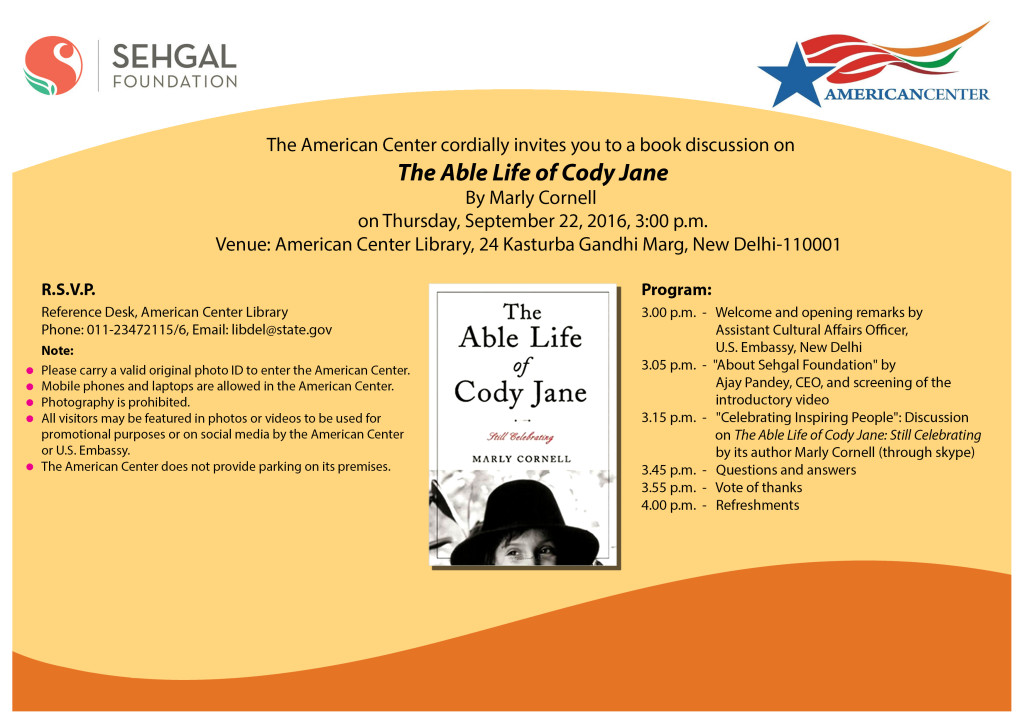 US Embassy talk about Cody

July 2016. The American Center Library, within the United States Embassy in New Delhi, India, has invited me to talk about The Able Life of Cody Jane: Still Celebrating by way of Skype on September 22, 2016.  I had the great pleasure of speaking at the American Center Library in March when I was in India visiting Sehgal Foundation. The talk in March was aboutTogether We Empower: Rekindling Hope in Rural India. I spoke there also in August 2015 about Seeds for Changes: The Lives and Work of Suri and Edda Sehgal. The people who attended the talks included university students, members of the public, US Embassy personnel, and professionals of all sorts. The venue was lovely, and the people were fantastic. Cody would be so thrilled to know that people on the other side of the world will hear about her life and the important issues she cared about.

June 2016. Each attendee at the 2016 National Spina Bifida Association Conference, held in Bloomington, Minnesota, in June, was given a copy of The Able Life of Cody Jane: Still Celebrating.

May 2016. Just announced International Book Awards the 2016 winner in Biography is Seeds for Change: The Lives and Work of Suri and Edda Sehgal, and the winner in Social Change is Together We Empower: Rekindling Hope in Rural India. (Yay!)

March 2016. Marly Cornell spoke at the American Center Library at the United States Embassy in New Delhi, India, about Together We Empower: Rekindling Hope in Rural India. Suri and Edda Sehgal, Jay Sehgal, Pooja Murada, Lalit Mohan Sharma, Jane Schukoske, and other esteemed members of the Sehgal Foundation team from Gurgaon took part in the presentation.

March 2016. Foreword Reviews just announced finalists for Indie FAB Book of the Year. Together We Empower: Rekindling Hope in Rural India was named a finalist in Social Sciences.

November 2015. Together We Empower: Rekindling Hope in Rural India by Marly Cornell, and published by Sehgal Foundation (2016), arrived from the printer! The ebook is now available on Amazon and the print book will be listed soon in the catalog online of the Missouri Botanical Garden Press!

September 16, 2015. The local launch of Seeds for Change: The Lives and Work of Suri and Edda Sehgal was finally held in St. Paul at SubText Books’ new location. Other launches of the book were held over the past year in Gurgaon, India, Hyderabad, India, and with presentations at the Missouri Botanical Garden in St. Louis. Special guest Jay Sehgal was present at SubText with the author, Marly Cornell, to offer insights and observations about his unique and remarkable family. Economics professor at St. Catherine in St. Paul, Dr. Deep Shikha, offered a strong endorsement and inspiring comments about Sehgal Foundation and the wonderful work being done in rural India to bring hope and empower the poorest of the poor.

August 27, 2015. On what would have been the 43rd birthday of Cody Jane Ahlburg, Marly Cornell celebrated her daughter’s birthday during the wee hours of the morning (in Minnesota) by taking part in a presentation in the late afternoon (in India) at the American Library in Delhi,  by Skype. Excerpts were read from Seeds for Change: The Lives and Work of Suri and Edda Sehgal, and representatives from Sehgal Foundation spoke about their work. Those gathered asked questions and engaged in conversation during the two-hour presentation. Suri and Edda’s nephew and Sehgal Foundation trustee Jay Sehgal offered his unique and endearing perspective concerning some of the astounding information revealed in the biography that he, and others in his family, had previously been unaware of before reading the book.

March 28, 2015 Saturday. You are invited to the Bloomington Writers Festival and Book Fair, all day at 1800 West Old Shakopee Road, Bloomington, MN 55431. Print and audio versions of The Able Life of Cody Jane: Still Celebrating will be available. Proceeds from all sales of this book go to the Spina Bifida Association.

Also available for the first time in Minnesota, copies of Seeds for Change: The Lives and Work of Suri and Edda Sehgal by Marly Cornell, published by Sehgal Foundation in October 2014, and distributed by the Missouri Botanical Garden Press.  This award-winning book is inspiring. The subjects of the book are heroic. Proceeds for the sale of this book go the Sehgal Foundation, which helps the poorest of the poor in rural India.

As a sweet reminder, check out the book trailer for The Able Life of Cody Jane.

August 3, 2014 Come to Subtext bookstore in St. Paul for Local Author Day–where several local authors, including Marly Cornell, will read from and talk about their work. Cornell will discuss the amazing things that have happened (magical, good,  funny, and otherwise) in the four years since the publication of The Able Life of Cody Jane.  Subtext bookstore is in the Cathedral Hill area of St. Paul, 165 Western Avenue, North, St. Paul, MN 55102 Please come! The fun starts at noon! Marly to speak around 1:30 p.m.

March 2014 Come to the Bloomington Writers Festival on Saturday March 22, 2014. Marly Cornell will be helping to cover the Professional Editors Network (PEN) information table all morning. We’ll bring copies of the AUDIO version of The Able Life of Cody Jane: Still Celebrating by Marly Cornell. Lots of neat people and books will be there. Check it out!

September 2013 See the book trailer for The Able Life of Cody Jane: Still Celebrating created by Davis Sound, with an original song by James Schattauer. See the trailer.

The presentation “The Best Thing That Ever Happened to Me” by Marly Cornell at the Lake Harriet Spiritual Center 9.8.13 is posted on YouTube. Click here to watch.

July 2013 The audio version of The Able Life of Cody Jane is now available! The MP3 downloadable version can be found on Amazon [UnabridgedAudible Audio Edition]. The audio version is also available from the Spina Bifida Association, Marketplace page (scroll down). The book is read by Marly Cornell.

March 2013 Update With the help if Davis Sound, LLC, The Able Life of Cody Jane will be available this year in an audio format, read by the author.

June 30, 2012 Marly Cornell was interviewed by Dr. James Sutton, psychologist and host of The Changing Behavior Network. Go to the page to listen to the interview.

June 28-July 1, 2012 Marly Cornell was a speaker at the 39th Annual Spina Bifida Association National Conference, held this year in Indianapolis, Indiana. The conference theme is “Gearing Up for the Future” and Marly’s presentation is called “Independence: Start Now to Develop Transition Skills” for an audience of parents and young people with spina bifida. This was another terrific occasion for learning and meeting fantastic people. (Very exciting) For more conference information, go to www.spinabifidaconference.org

Wednesday, April 11, 2012 (6:30-8:30 p.m.) The Able Life of Cody Jane, Marly Cornell, and LightaLight Publications was featured at the Midwest Independent Publishers Association (MIPA) Vendor Fair, at Joule, 1200 Washington Ave, Minneapolis. FREE, open to all. A map can be found at http://cojoule.com/location/directions.php. Please come!!!

March 24, 2012–Everyone is invited to the Bloomington Writers Festival and Book Fair on  Saturday–The BOOK FAIR is from 10:30 to 3:30. I will be there with The Able Life of Cody Jane at a table along with Connie Claire Szarke, who will have her book, Delicate Armor. The Bloomington Art Center is located at 1800 W. Old Shakopee Rd. in Bloomington, Minnesota. Please stop by!!! The book fair is FREE!!!!

January 18, 2012 — Great news to be reviewed by the Christopher & Dana Reeve Foundation! Review The Able Life of Cody Jane is also available in their library, the Paralysis Resource Center (PRC) Library.

Marly Cornell was interviewed by Ian Leask on WriteOn Radio KFAI 90.3 in Minneapolis on November 15, 2011. The interview was available on podcast at www.kfai.org for two weeks after that date. Now we have permission to have it on this site! Thank you, Ian Leask and KFAI!

The Able Life of Cody Jane EBOOK is here!!

The Able Life of Cody Jane: Still Celebrating is now available as an ebook on Amazon and BarnesandNoble.com. Apple formats coming soon!

Due to requests for a Spanish version, we hope that will be possible soon too.

EVERYONE IS INVITED TO 2 PARTIES!!!

The Able Life of Cody Jane: Still Celebrating is published with the support from the Spina Bifida Association, Washington, D.C. Proceeds from all sales at this book launch will benefit advocacy groups, including Freedom in Wheelchairs and Wilderness Inquiry.

Sunday, June 5, 2011, 2-4 p.m., at the Metropolitan Center for Independent Living (MCIL) located at 1600 University Avenue, Suite 16,  in St. Paul. Proceeds from all sales at this launch party will go to MCIL and its many programs promoting self-advocacy for people with disabilities.

Marly Cornell’s daughter Cody was born with a severe form of spina bifida, the most common permanently disabling birth defect, but her story proves that disability does not equal neediness or pity. This lively and often funny memoir offers strategies for survival and success for anyone facing serious health challenges.

Come join our celebration!!  (There will be music, treats, a reading, and author comments.)